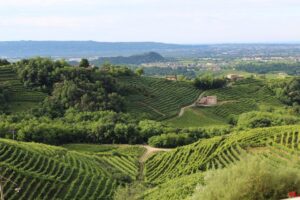 Le Vie del Prosecco are located between Conegliano and Valdobbiadene, capital of Prosecco Doc and Unesco heritage: the itineraries wind through hills with vineyards and ancient villages
Beauty, art, culture and tradition intertwine among the hills that go from Conegliano to Valdobbiadene along ancient paths and fascinating places scattered in what is considered the first Italian wine artery. Here wine lovers can taste the real Prosecco Doc and discover the products of the local gastronomy.

The Prosecco routes are divided into ring routes:

– the main route that wanted to follow the ancient Prosec road

– three historical-artistic itineraries for those who want to deepen the cultural aspects of the area.

Main path
The ancient Prosecco Route: itinerary from Conegliano to Valdobbiadene
Conegliano and Valdobbiadene are considered the capitals of Prosecco Doc: We start from Conegliano, therefore, a city that has an enormous historical charm, with its noble palaces and the frescoes on the facade of the Cathedral. The beginning of the Prosecco route is at the foot of the Conegliano Castle, at the Cerletti Enological Institute. Before going into the enological itinerary, however, a visit to the Institute’s Wine Shop is a must, which is full of frescoes dating back to 1800, when it was built.

You pass through San Pietro di Feletto and arrive in Refrontolo, where you are struck by the suggestive views of the Felettano hills. Once in Solighetto, Villa Brandolini immediately strikes with its eighteenth-century charm: seat of the Consortium of Prosecco Doc Conegliano Valdobbiadene: one of the most important stages of the tour. Continuing the way you arrive at Col San Martino, a medieval hamlet where you can admire the Credazzo Towers, an ancient testimony of the Lombard presence. Along the way it is possible to enjoy the expanses of vineyards lying on the hills.

After having passed Santo Stefano and San Pietro di Barbozza, we finally reach Valdobbiadene. The city is the seat of the Spumanti d’Italia Forum and of Altamarca, located in Villa dei Cedri. The end of the journey is consumed by sipping a good glass of Prosecco in the main square, where beautiful neoclassical buildings peep out.The three themed itineraries of the Prosecco streets: Collalto, Serravalle and Follina, Fregona

Historic-Artistic Routes
The fief of Collalto
The first of the three themed itineraries created to enhance the Veneto region of Prosecco. It is famous for its two castles:

The Susegana Castle dates back to the fourteenth century and is one of the largest fortifications in Italy: positioned on a hill, it occupies the entire summit and is surrounded by a double wall.

The Castle of Collalto, built in the twelfth century and, unfortunately, only ruins remain. Today it represents one of the oldest possessions of the Counts of Collalto. The route reaches the ancient manors and shows the typical houses of sharecroppers.

In Follina there is the Circus Abbey, which dates back to the 12th century and is complete with cloister, monastery and Basilica. Continuing east you can admire the Brandolini Castle, which dominates the village of Cison di Valmarino. Here it is possible to undertake a historical-cultural itinerary called “La via dei Mulini”. Continuing the route we arrive at the city of Vittorio Veneto, an important historical center linked to the conclusion of the Great War. The birth of the city is due to the union of the two centers of Serravalle and Ceneda, both dating back to the sixteenth century. There are numerous ancient buildings that can still be admired today, where the aristocratic families once resided.

Fregona and the Torchiato Doc
Last but not least is the itinerary dedicated to the DOC production area, in particular to Fregona and Torchiato, a prestigious wine product with a very sweet taste suitable for holidays. Fregona is also famous for its typical mountain gastronomic products (cured meats, cheeses, …), for the Villas Salvador (in Baroque style) and Troyer (from the 17th century) and for the Caglieron Caves. To the north of Fregona is the Piana del Cansiglio, a tourist resort where you can spend a holiday in both winter and summer between excursions, golf, skiing, horseback riding and mountain biking.